“Being an artist was never a choice for me,” says this week’s cover artist, Sebastian Blanck. “I can’t remember a time in my life when I wasn’t making things.” Having been exposed to art at a young age by his mother, Blanck has been creating his entire life. 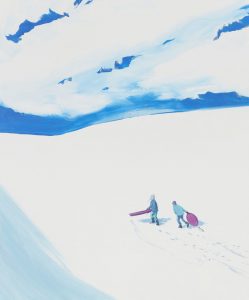 What was the inspiration for this piece?
I am inspired by daily life and my work is loosely a journal. I show the quiet moments in life. Images that I think are beautiful and that I want to share with the world. This painting, “Cobalt Sky,” is based on a day I spent sledding with my two sons in the Hudson River Valley. It is one of the larger paintings in an ongoing series of snow scenes. It was part of a show I had in Aspen, Colorado a couple of years ago at Baldwin Gallery, titled “Weather Window.” I think a lot about how to best marry an image with the materials I’m using. In this oil painting, the white of the snow is also the white I used to prime the canvas. The vibrant color of the sky is cobalt blue with a touch of manganese blue. The sky acts as negative space against the form of the hillside, which is mostly unpainted, other than a few shadows and the tracks of the boys walking through the snow. Ideally my goal in any painting is to have the first touch be the last touch. So the paint is as fresh and alive as it can be. I want each mark to be like tracks in the snow, and I want the image to feel fresh and effortless.

Talk about your artistic process.
Like most people, I take a lot of photos in my day-to-day. The difference is that I turn many of those images into paintings, drawings, collages, and monoprints. I work fairly quickly—I aim to make a painting a day. The methods that I use are all related. For example, I just finished a series of large charcoal drawings of my wife in a sunhat, with light filtering through the hat onto her face. My approach for these drawings is creating a mid-tone gray over the whole sheet of paper first. Then I erase out the lightest tone to describe the pattern of dappled light on her face. After the highlights are brought out, I develop the darker tones and draw in greater detail. I deepen the shadows and darker aspects of the figure and landscape around her. It’s a very physical process. Some of the drawings are quite large, with the largest ones being 55×45 inches. This was a tactic I developed first in collage pieces. This is one of a number of ongoing series that I return to often, which include figures in the snow, children at aquariums, portraits of artist and musicians. Often I re-use an image, making it into a collage, then a painting, then a monoprint. The shift in materials and technique allows me to use the imagery in related but different ways.

Where do you get inspiration for your art?
There are so many things that feed me artistically. Sometimes it’s a moment with someone that I think has a certain magic. Sometimes it’s trying to learn how to work with a new material. I never go to studio and feel like I’m out of ideas or things to paint. I find the more I work, the more ideas I have. My wife and children are my favorite subjects to paint. Luckily for me they are willing models.

How did you get started as an artist?
When I was about 5 years old, my family moved from Tucson to Baltimore. The Maryland Institute College of Art (MICA) was just down the street from where we lived. During my childhood [my mother] went to school there and completed her degree. She had a studio in our house and she made large sculptural wall pieces that incorporated weaving and mold making on to geometric wooden structures. Her pieces hung all over our house and her studio was always filled with fun and interesting materials. I feel very lucky to have grown up in a house where art and art making was a normal aspect of our everyday experience.

When she first started there, I was in kindergarten. When I had half days, she would take me to class with her at MICA. Even at 5 years old, it was clear to me that I belonged in art school. I struggled as a student, especially in high school, but I drew constantly. I was lucky enough to attend RISD for college. After years of dreading classrooms, I finally felt like I was where I was meant to be.

After graduating, I moved to New York. Eventually I moved in with my then girlfriend, now wife, the painter Isca Greenfield-Sanders. When I was first out of college, I did a bunch of art world jobs. Most importantly, I was an assistant for Alex Katz. Alex taught me more about paint, and approaches to painting, than I had learned in four years of art school. Alex’s other assistant was the artist Stuart Elster. Stuart and I would talk about contemporary art as we worked in the studio. I learned so much from both Alex and Stuart.

Being an artist was never a choice for me. I can’t remember a time in my life when I wasn’t making things. My first show in a professional gallery was in 2000 at a gallery in Brooklyn called Eyewash. It was a small group show and I was able to include a few paintings. It was from a series of nudes behind a shower curtain made of dots. So the image was figurative and abstract, both completed and disrupted visually by the pattern in front of the figure. I am still drawn to making these types of images that have something that makes the image both complex to visually understand but is  also how the image is made whole. Currently I explore these ideas in two separate series. One is the “Isca in Her Sunhat” series and the other is of our boys playing outside when it’s snowing.

If you weren’t an artist, what would you be doing?
If I weren’t an artist, I would be a musician. I love music, and the way musicians think things through. I’ve played guitar for most of my life, and have released a number of solo albums. I was not suited to the lifestyle of a musician, which is really tough. I toured in a band when I was just out of college. It was super fun, and I have great memories of that time, but I didn’t really like being on tour. Plus, there was no time to paint!